I suppose I should share with you how this mission trip came about. Let me begin by telling you an experience I had years ago. I am not sure how old I was, maybe close to 13. I was at church when a woman came to my mom and I. She told us that she had seen great plans that God had for my life. At the very moment she told me, I very clearly felt God speak to my heart that I would one day be working in missions. At the time I had never been on a mission trip and thought nothing of it.

Fast forward to freshmen year of college. Early in the first semester, I felt like God was calling me to go on a mission trip. I spent hours searching the internet trying to find a way to go. I never found anything that I felt was God’s trip for me. I had no idea where God was sending me, but I knew He was calling me to go. That burden stayed on my heart for a year.
In my second year at college, I began attending something called Campus Church. Campus Church would gather on Tuesday nights and would offer college students an opportunity to join together and pour their hearts out in worship to God. Towards the end of the semester, an announcement was made that a group would be traveling to Nicaragua on a mission trip.
From the very first informational meeting, I knew that was where God wanted me. We spent the next six months or so planning. We faced a lot of challenges in those months, but God had begun a good work in us and would see it to completion.
The first week of May 2009 we traveled to Nicaragua. I had no idea that one week there would forever change my life. Even now as I remember our arrival and the rest of our time there, my heart swells with love. We spent our week working in various schools conducting Bible school. I am sure the word “school” brings a certain image to mind (concrete walls, classrooms, colorful creations lining the walls, playgrounds). School in Nicaragua is very different. Instead children have class underneath a big tree in their teacher’s yard, in a house smaller than my room, or in what used to be a chicken coop. We were also taken to the local landfill one day to distribute food. The people who lived in that area dig for food in the landfill. Tears streamed down my face as I saw families living in homes of cardboard and newspaper. The poverty broke my heart.
But what broke my heart even more were the people. Despite the horrible conditions in which they live, they were so full of joy. They were so welcoming of us, so thankful just for our prayers. My heart was broken for people living in the U.S. We are so ignorant. We are all so rich. Despite your salary, the car you drive, the size of your home, you are rich enough to have a computer to read this. Yet despite our abundant blessings, so many are lacking in joy. We constantly are striving for more. More money. More stuff. We need nothing more. We only need more God.
I was heart broken to leave Nicaragua. I found myself constantly longing to return when I came home. My heart had been split. Like the lyrics of the song “Albertine”, I knew, “now that I have seen, I am responsible. Faith without deeds is dead. I will not let go until you are…” I had seen, and I knew I held the responsibility to act. I could not let go of those precious people.
I began to pray for God to open a door. I prayed Isaiah 6:8 over my life. “Then I heard the voice of the Lord saying, ‘Whom shall I send? And who will go for us?’ And I said, ‘Here am I. Send me!'” I wanted to go, but more than that I needed to go. God had given me a sacred ambition, a holy obsession.
In July, God allowed me to begin forming a team to return. Over time that team has developed into nine members. Leading this team has been the most challenging thing God has ever called me to do, and the most rewarding. I suppose some would call me stubborn. So the fact that I know satan HATES what this team is doing, just makes me want to fight him all the more.
Since July, I have become more aware of the responsibility we have as His disciples.
We are not going to Nicaragua to convert the people to Christianity. We are going simply to love. We want to show Christ’s love through our actions. Time and time again throughout God’s word, He tells us to love. That we will be known by our love for one another. That we are to love our neighbor as ourself. It is not our job to save the world. Christ did that when He died on the cross for us. We are called simply to love. God will do the rest.

My heart longs for Nicaragua. It always does, but this is one of those times when my heart aches a little bit more than usual. I long to hold those dirty little hands. To kiss on there faces. To be so tired, dirty, filthy in this wonderful, beautiful, never felt so clean kind of way. It feels like home there. A chunk of my heart was left there when I came home last May. Pieces of my heart are spread all across Leon. I know God has called me back. So I know he will provide. It would be easy to look at what we still need and be so overwhelmed. But in ways that I do not understand, God will provide. I do not know where it will come from, but it will come. God will see this to completion. He will make a way. 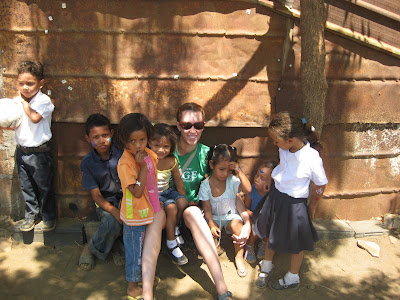 I’m not really sure how this whole blogging thing will go. If nothing else, it is another outlet to praise my Father. So here goes…
I love those moments. Moments when God’s love is so evident. When I am so in love with God, and I know he is so in love with me. When I am amazed by his love, power, and wisdom. Yet I know there is more. There is so much more love to discover. There is so much more for me to uncover.
As I was walking home from class today, I was convicted by my lack of concern and lack of praise. I make that walk 5 days a week, and almost every time my thoughts are filled with my to do list or some other such meaningless thing. I am more concerned with MY life, than the life of the person passing by me. I am blessed and happy, but that person could be hurting. That person has a soul that God longs for. How many people do we see a day? A lot. And each one of them is loved by God. But do they know that? Is my life in those brief seconds showing them that? Probably not since I am too busy thinking about my to do list.
Or why in my walk home, am I not lifting constant praise up to my Creator? I am healthy, clothed, fed, and loved. Right this moment there is a child dying because of a lack of medical care. There is a family starving and wearing ragged clothes. There is someone who is alone and doesn’t know what it means to be loved. And here I sit in my nice apartment (that I so often complain about), typing on my laptop, listening to my I-pod, and checking my Blackberry. I have two closets full of clothes, the majority of which I could do without. My kitchen is full of food, yet I often complain that there’s “nothing to eat.” I am surrounded by friends and family that love me dearly. Most importantly, I know the love of a God who has given me all of this and more. I know the love of a God who sacrificed his son for MY sins. I know the love of a God who loves me and desires me even when I choose other things over him. Yet despite all of this, the thing I choose to think about on my walk home is my to do list.
I know there is more to this amazing, exciting, miraculous relationship, and I want more. I want to fall deeper in love with God. I want to know what it is to feel as though I am starving, thirsting, desperate for my Lord. He is Yahweh Yireh, the Lord who will provide, and I cling to that promise.