Things to do before June 19th…

I list such as this tends to cause freak-out moments. Freak-out moments are when I have tons of things to get done and suddenly remember all of the things at once. I then become extremely stressed and “freak-out” over all I have to do. This is usually the conversation I have with myself, “Oh my gosh I have so much to do! How will I ever get it done? It’s too much. This is too much pressure for one person. I’m not ready to handle all of this. This seems impossible. I’m going to have a heart attack before it’s all done. There’s just no way I can do this.” I was having one of these moments last week, having that exact conversation in my head. And when I thought, there’s just no way I can do this, I heard God say to me, “No you can’t, but I can.” I love when God does that. When I’m crying out to Him, saying I can’t do it, wanting Him to tell me that I can do it, and instead He says, “No you can’t, but I can.” It’s something that should be so obvious to a Christian, but yet I need to be reminded of it all the time. I am so thankful that my Father doesn’t expect me to do it. I’m so glad that “with man this is impossible, but with God all things are possible.”

I was watching the show “Cold Case” the other day. I had never seen it before, but the one episode has really stuck with me. The episode was about a guy who would kidnap women and eventually kill them. (I am sure you are wondering what this has to do with anything, but bear with me.) All of the women he kidnapped, had something to live for. One woman had a newborn baby, one a fiancé, and one faith in God. He would keep these women locked in a basement. He would then wait for them to give up hope. He would even still feed them. He would wait until the women gave up hope of escaping, until they gave up hope in the thing they lived for. He would then lock them in the basements to die. He was describing this process to the detectives, satisfied with himself that they all gave up. Something he said struck me though. He told the detectives, after they asked about the woman who had her faith, that she was the one who gave up the fastest.

Now I know this is a scripted T.V. show, but does it hold some truth? I know we would all like to think that no matter what we may face, we will trust God. But is that true? If you were like these women, kidnapped, locked in a basement alone for weeks or months, would you still have faith that it was part of God’s plan? Or perhaps if you or a loved one are facing a disease like cancer. If no amount of treatment is working, and the illness drags on for years, would you still trust God was listening to your prayers?
A few days after watching “Cold Case” I read in Daniel about Shadrach, Meschach, and Abednego. King Nebuchadnezzar had made a golden idol for all the people to worship. Whoever did not fall down in praise to the idol would be thrown into the furnace. Shadrach, Meshach, and Abednego refused to worship the golden image. Upon questioning them, King Nebuchadnezzar threatened to throw them into the furnace if they did not worship his god. The three men replied in verse 17, “If we are thrown into the blazing furnace, the God we serve is able to save us from it, and he will rescue us from your hand, O king.” It is what they spoke in verse 18 that amazes me, “But EVEN IF HE DOES NOT, we want you to know O king, that we will not serve your gods or worship the image of gold you have set up.”
Shadrach, Meshach, and Abednego were not only willing to die for God, but they were willing to die for Him even if He did not save them! Am I that devoted to my Lord? I would like to think I am, but am I? Are any of us? I am not saying you do or do not have such faith in God. What I am saying, is that it is not enough to simply hope for that kind of faith.
Jeremiah 17:7-8 says, “Blessed is the man who trusts in the Lord, whose confidence is in him. He will be like a tree planted by the water that sends out its roots by the stream. It does not fear when heat comes; its leaves are always green. It has no worries in a year of drought and never fails to bear fruit.”
We have to stay rooted in God, rooted in His word. I don’t want to just hope my faith would hold up in the fire. I want to dig my roots deep in the Lord so that no matter what fiery trial I face, my leaves are always green and I never fail to bear fruit. I want to be a tree.

-Ephesians 6:12
We are in a war. Daily. If you are a child of the King, a disciple of Christ, a soldier in God’s army, satan wants to kill your spirit. You are a threat to him. He wants to destroy you and your quest to lead others to Christ. He is attacking you, trying his best to eliminate you as a threat. But take heart! “For the battle is not yours, but God’s” (2 Chronicles 20:15).
All you have to do is be like Moses in Exodus 17. Stand and lift your hands to God. As Moses stood on the hill he watched the Amalekites attack the Israelites. Yet, as long as Moses kept his hands to God, the Israelites were winning. God fought the battle for him. And God fights your battles for you. You already have victory through him (1 Corinthians 15:57). You are more than conquerers in Him (Romans 8:37). Just lift your hands to the Mighty King.
Yet, God does not stop there! All you have to do is lift your hands. Such a simple command. But when you grow weak and can no longer stand, God will send help. When Moses grew tired and could not hold up his hands anymore, God gave him Aaron and Hur to hold his hands for him. God will send you help. When you are devoid of strength, he will place a stone beneath you and send someone to hold your hands up.
So you see, you are “thoroughly equipped” for find your victory (2 Timothy 3:17). It is there waiting for you. How wonderful it is that the creator of the universe does everything for you. He simply asks that you let Him.

The Count It All Joy Mission Team had our first car wash on March 27th. God was so good to us! We washed cars nonstop that day, sometimes having up to five cars waiting in line. We were able to raise about $400. God’s provisions are amazing. Thank you to everyone who came out to support us! 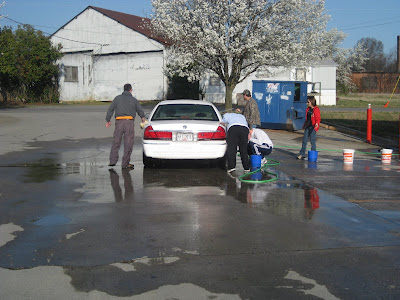 This past weekend was Easter. There is no greater love than the love God demonstrated when He sent Christ to die for us. Isaiah 53:5 says, “But he was pierced for our transgressions, he was crushed for our iniquities; the punishment that brought us peace was upon him, and by his wounds we are healed.” It is unfathomable that the king of the universe would make himself a servant and die a criminals death for us. God is Yahweh Rophe, the Lord who heals. His death healed, cured, and restored us. His death made us whole. And He is still Yahweh Rophe today. He still longs to heal our bodies, minds, and hearts. He still wants to heal us of our sin sickness. And we so desperately need that healing everyday.