The wait is over! Tomorrow begins my journey to Uganda. I am so overwhelmed with emotions. I am excited for God to wreck me. I want to be broken. I know the coming days will be a whirlwind. I am sorry I haven’t been very good about blogging lately. God has been teaching me more about waiting and resting in Him, something I am not always very good at.

Please be in prayer for my team over the next 13 days. I’ve copied our itinerary below so you can follow along with our trip. I’ll try my best to update as I can. We’re trusting God to open some crazy doors for us in Uganda. We are going to LOVE and love BIG! Thank you for all of the support. It is an understatement to say that I appreciate you. I would not be able to do this if you had not played your part in God’s plan. Thank you!!

Fly out of Atlanta for Dulles at 5:55 pm. Spend the night in Washington D.C.

Meet at 6:30 a.m. for breakfast and depart for the airport. Entire team will fly out of the Dulles airport on Ethiopian airlines at 11:00 AM for Uganda.

Arrive in Entebbe at 12:45 PM. Head to the Adonai hotel and check in. Exchange money, use internet. Rest some, devotions, dinner with the team.

Minister to children and teach VBS at children’s prison #1.

Minister to children and teach VBS at children’s prison #2. Three hour drive to Jinja to Canaan Childrenʼs Home. Dinner and time with the kids!

Walk to Amazima to work with the Karamajong children through Katie Davisʼ ministry. Walk back to Canaanʼs to minister to the children and have dinner.

Spend the morning with the children at Canaanʼs and have lunch. Drive to Iganga with Pastor Isaac & minister to children through their feeding program & Bible clubs. Drive into town to visit the Source Cafe for coffee & internet and shopping.

Breakfast at Canaanʼs Children Home. Spend the morning and afternoon with the children. Drive to Amani Baby Cottage to spend time with the babies from 4-6 PM, feed them dinner and put them to bed around 7 PM (get to rock some babies!!).

Breakfast at Canaanʼs and say goodbye to the children. Depart for The Haven resort. Lunch with team & enjoy a day of relaxation & rejuvenation (horseback riding, fishing on the Nile…)

Depart by 9 am and drive 3 hours to Kampala. Spend the day with Pastor Samuel & the children of Return Ministries.

Spend the day with Rebecca and the children at My Fatherʼs House and Royal Hope Academy. Dinner at Adonai, relax and team re-cap about the trip.

Depart at 11 AM for Entebbe. Arrive at the airport for check-in by 2 PM. Flight leaves at 5:15 PM for the States.

Arrive home in the States!

I had a post all typed up and ready about my waiting for the Uganda trip. However, I will now be saving that for a later day.

Instead, I want to share with you my experience tonight that could have been so very horrible, but by some miracle of God I was kept safe.
I spent this evening with my fiancé. The drive from his house to mine requires going through one busy intersection, then a long stretch of road with a whole lot of nothing, including street lights. I was not quite paying attention at the busy intersection like I should; I went through a light that while not red, I could have stopped for.
A car quickly appeared behind me that looked to be a police car. He had a spotlight on the driver’s side that he turned on. I began slowing down looking for a place to pull over. I assumed that because I was showing my intent to pull over, he did not turn on a siren or police lights (mistake #1).
I found a spot that I was semi-comfortable pulling over at. Again, on this stretch of road there are no street lights or populated areas. Once I stopped, I got out my license and my mace (one smart decision). As the man approached my car, I heard what I thought was a police radio. When he got to my window, he was not wearing a uniform. I panicked.
He pulled out a badge, and said he was officer s0 in so (no I don’t remember his name). He did not ask to see my license, but instead began yelling at me. He told me I could have killed someone, I wasn’t thinking about anyone but myself, I needed to care more for other people, etc.
He even went on to tell me that he had the right to take me to jail. At that point I REALLY panicked. I argued that he had no reason to take me to jail. I had not done anything. To spare you the details of the 3-5 minutes, there was a lot more yelling on his part. The ordeal ended by him telling me he had my tag number, and would make a note on the car.
I immediately called my fiancé and told him what happened. He in turn, called the police department to make a complaint. An officer called me back, asked me to describe what happened, then proceeded to tell me that this has not been uncommon. He told me that the man was not actually a police officer (I know you’re thinking, “well obviously!”), that this has been happening for several weeks in our county, and that one man has already been arrested.
Obviously, looking back I see how many mistakes I made in this instance. So I’ll save you some time…1) I should not have pulled over when there were no blue lights 2) I should have only pulled over at a populated area 3) I should have called the actual police when I suspected something was off.
But mistakes aside, wow. There are no words. God’s protection over me tonight has floored me. This could have ended so very differently. I am brought to tears when I think through all of the ways this could have played out, instead of me driving away safely. I have done nothing to deserve to be spared of something worse. Yet, I was, and that floors me.

30 days until I leave for Uganda! In 31 days my team and I will be surrounded by hundreds of precious people to love. I am in awe that God has given me this opportunity to love. I know God is going to break us. I am beyond excited.

I would not be going to Uganda without the support of all of YOU! But, we’re not done yet! I’m asking you all to dig deep to help me and my team spread some love around Africa. There are SO many ways listed below that you can help. We are all the body, what part will you be?
1. Headbands and Bows! 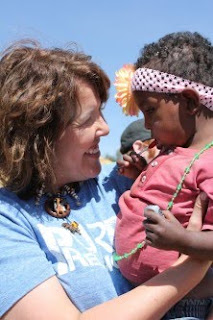 We are collecting as many headbands and bows as you can send! In February the Visiting Orphans team took 1000+ headbands to Ethiopia. We need your help to do it again!
2. New White Handkerchiefs

Dinner To Darkness from Sixty Feet on Vimeo.

God has opened the door for us to partner with Sixty Feet. We will be going into two children’s prisons, “M” and “M2”. Children are held at these two prisons for three reasons: they have been charged or convicted of some offense, their parents rule them as “stubborn” and drop them off there, they are abandoned “at risk” orphans.
When “M” was first discovered, there were rooms of children locked up, young kids chained to windows, and even a 10 day old infant, malnourished and living in her own urine.
We will be doing a project with the children here and need new white handkerchiefs! We want these children to know God’s love and the adoption they have in Him.
3. VBS
We will be focusing on 3 stories while in Uganda:
The Good Samaritan
Joseph and the Coat of Many Colors
David and Goliath
We need Bible books, crafts, bracelets, puppets, anything to make these stories come alive! We’re also still searching for a coat/robe of many colors!
4. You can also go shopping for things from my Amazon Wishlist . These are some more ideas of how you can help us love big in Uganda.
5. Ministry Needs
While in Uganda we are going to be working with some AMAZING ministries: Amazima, Return Ministries, Canaan Children’s Home, Sixty Feet, Amani Baby Cottage, My Father’s House. Several of the ministries need money to purchase things like a van, school fees, sanitation, immunizations. Monetary donations will help our team pour into these needs.
Each of the ministries sent us a list of current needs. Here they are compiled into a giant list:

Megaphone or some type of amplifier.

Scissors: small and several big ones