While in Uganda, my team and I spent four days at Canaan Children’s Home aka Heaven on earth. Canaan’s is an orphanage that offers a home, education, love, and family. There were some angels there that certainly stole my heart.
So back to Pastor Isaac’s story…
Pastor Isaac was working with some missionaries when Idi Amin came to reign. Christianity, and all things related, were strictly banned. Those who opposed and were caught in church or with a Bible were put to death.
Pastor Isaac along with other Ugandans held secret underground church services. He buried his Bible in his room, bringing it out only to copy a few verses on a piece of paper that he would hide in his clothing. We take our Bibles seriously for granted!
Pastor Rebel became a wanted man. One day soldiers came to Pastor Isaac’s home. He told his wife and two children to run and hide. He was taken and severely beaten. The soldiers put him in a room packed full of other pastors. As Pastor Isaac shared his story with us, he told us how they stood shoulder to shoulder on top of the blood of the ones who were killed before them. They were kept there without food for three days. On the third day, soldiers told them men to renounce God and become a Muslim to spare their life. For those who refused, death awaited them.
Pastor Isaac and the other men were taken outside, blindfolded, and bound. Pastor Isaac told us that he asked one of the soldiers to please hurry and kill him. He would just get to meet Jesus that much sooner. All of the pastors were lined up along a wall. One soldier was assigned to each man. They opened fire. Pastor Isaac heard the gunfire, but was not shot. The soldier firing at him approached him to ask if he was a magician. Why was he unable to shoot Isaac?
Finally, another soldier shot Pastor Isaac in the arm. When he fell to the ground, they assumed he was dead. Pastor Isaac was thrown on the back of a truck with the rest of the dead bodies. They were driven to a forest where there was a pit already full of dead pastors. Isaac was thrown near the top. After the soldiers left, Pastor Isaac heard a voice telling him to get up from among the dead. “I have saved your life so that you may save the lives of my fatherless children.”
Pastor Isaac crawled away from the pit. A herdsman found him and took him in. The man sold his cow to pay for Isaac to receive treatment at the hospital. After a short stay there, doctors helped him to escape to Kenya. Two years after his capture, Pastor Isaac was able to locate his wife Rebecca and let her know he was alive. Can you imagine?!
When the reign of Idi Amin ended in 1979, Pastor Isaac and his family were reunited at the exact same place he was captured. They rebuilt their life there. Pastor Isaac had forgotten God’s words until one day in 1982 a woman and her two children appeared at his home. She was dying and searching for a place for her children to go. Pastor Isaac told her he could not help her, but they could stay there for the night. In Pastor Isaac’s words, “that woman was very smart,” and left early the next morning. Those two children became the first of many in Canaan Children’s Home.
Pastor Isaac’s story sounds like it either came straight from the Bible or Hollywood. I want his life story to encourage, inspire, and challenge you. He is a man I greatly admire. He is so full of joy. It is beautiful to see God so alive in His life. My life has been and is so easy. I have no idea what true hardship is. I love that God is powerful enough to take all of our pain, like the pain we talked about with the handkerchiefs and teenagers, and turn them into treasures like Pastor Isaac and Canaan’s.
Before we left Pastor Isaac asked our team to pray for that God would provide the one that would take over Canaan’s one day. I hope you will join me in praying for this amazing, godly couple. 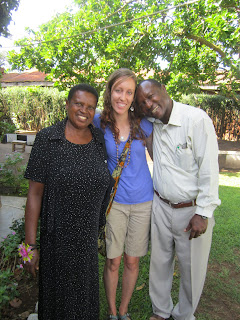 Up next, worship Africa style and my LIFE CHANGING times in the prisons!